Along with our January update, we are introducing a new way to enjoy and accumulate rewards while playing FreeStyle 2. We would like to introduce the Mega Pass.
The Mega Pass event starts at 2019 – 1 – 16 and lasts until 2019 – 2 – 20. 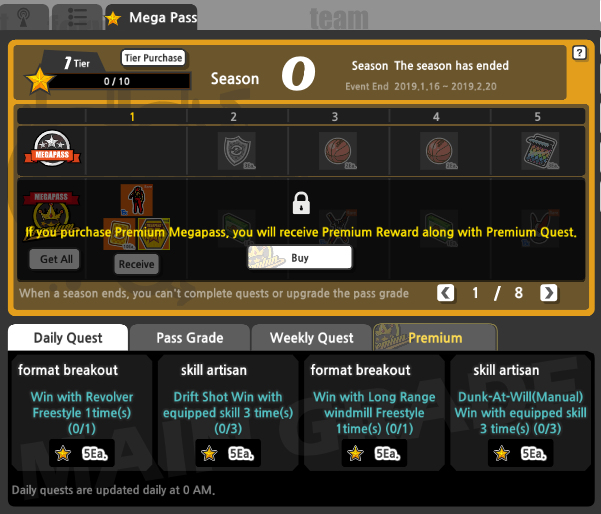 The Mega Pass is a Limited time Event where ballers are given daily, weekly quests, and pass grade missions to level up their Mega Pass.

Players are rewarded depending on the tier of their Mega Pass. The Mega Pass is free to access for everyone. There is a premium version of Mega Pass purchasable in the shop which will unlock premium quests.

Players can buy the Premium Mega Pass for 990 GKash which will give them access to additional quests and more rewards.

Every tier there will be a reward for both a regular and a Premium Mega Pass.

[REWARD LIST]
How do I Level Up my Mega Pass?
You can level up your Mega Pass tiers by collecting stars.
Stars can be acquired by completing daily and weekly quests, and by completing the Pass Grade Missions.
Once you have completed the quest, you can click on the quest and a receive button will appear. Stars will only be received when you do this, and the Quests will be reset daily and weekly so be sure to collect your stars as soon as you finish your quests!

Want to progress faster? Having a hard time finishing the quests? You can purchase Mega Pass tiers at the shop by 1, by 10, or by 25 tiers. 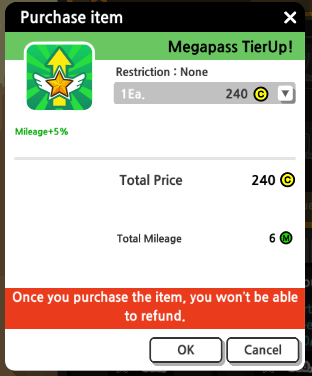 The Mega Pass is shared among all the characters of the account. If you are having a hard time finishing one quest, switch over to another character and complete the quests!

Premium Users will have access to Premium Quests which will grant users more opportunity to collect stars.

In addition to Premium Quests, users who purchase the Premium Version of the Mega Pass will be able to get 2 Exclusive Outfit Sets! The Cat Ninja Set and the all-new Dragon General Set!
LIST