Enter the Kings of the Royal Flush Gang!

IDO and Dion, like Alice and Olivia, are two Souls in One body. They share
each others abilities and strengths. After Alice and Olivia set their goal
towards the streets of FreeStyle, Ido and Dion wondered what she is looking
for and tagged along.

Now, both Ido and Dion understands what made Alice and Olivia stay at
the Streets of FreeStyle, and the excitement that wells up from their core
that resonates with streetball. 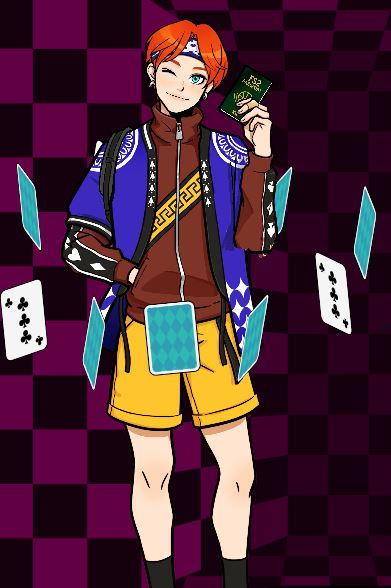 IDO is a half-Korean, half-Scottish member of a Boy Idol Group.
From his young age he was scouted by the Casting Director
of Korea's Top Entertainment Company, KFREE.

After years of surviving in the cutthroat business, IDO finally
decides to take a break and to visit his father's hometown, Scotland.

While sightseeing the Scottish attractions, he stumbled upon the
Stolen Eileen Castle and the Trump Card of which Dion was
sealed in. With their affinity towards each other nearly perfect,
they now both reside in the same body, changing to each other
whenever the situation needs it. Now they are working with
Alice and Olivia as the Royal Flush Gang.

Dion lived the same time as Olivia before being sealed away
in the Trump Cards. Back then, he and Oliva are in the same
group of powerful magicians whose motives are unknown but
their strength, universal.

He is not a King, but his demeanor, his aura, is very much
like royalty. People who were lucky enough to witness his
visage claimed that he is "more Kingly than a King".

He and Olivia were both operating when the tragedy struck
and they were sealed in the Trump Cards, Olivia in Queen,
and Dion as King. When IDO stumbled upon the King Trump
Card, Dion manifested and immediately was able to tell that
he and IDO has high Affinity with each other, that he decided
to borrow and reside in IDO's body for the meantime.

Together they will bring about Order and Rule the Streets
of FreeStyle after the wake of Alice and Olivia's havoc and
mayhem.

The Royal Flush Kings are coming!